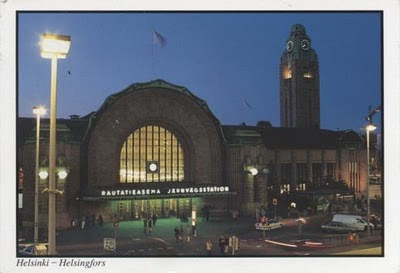 Helsinki Central Railway Station is a landmark in Central Helsinki. It is also the focal point of public transport in Helsinki. Used by more than 200,000 passages a day, the building is one of the most visited buildings in Finland. It serves as the point of origin for all trains in the local VR Commuter Rail and a large number of the long distance trains in Finland. The station has 19 platforms.
Posted by Ravindra's Collections at 08:04 No comments: 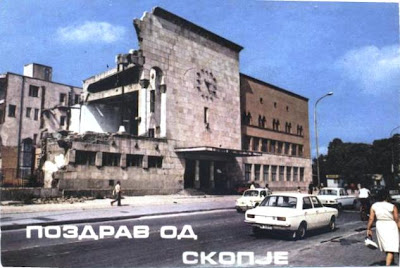 This card is a reminder of what happened on 26th July 1963. It shows the remains of the railway station after the earthquake. It is today part of the Skopje City Museum. The railway station was originally built in 1938.
Posted by Ravindra's Collections at 07:03 No comments: 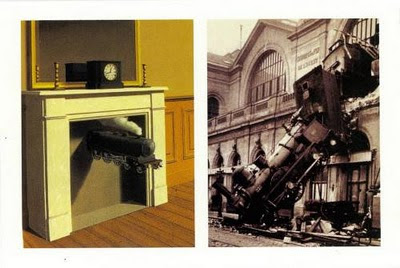 On 22nd October 1895, at 4pm, the train (Loco 721) coming from Grandville at a speed between 40 - 60 KM per hour was unable to stop and smashed into a wall of the Montparnasse train station facade in Paris. It broke through the buffers of the railway tracks and continued on 15 meters beyond the tracks, coming to a hault at Rennes square.
Posted by Ravindra's Collections at 06:56 No comments: 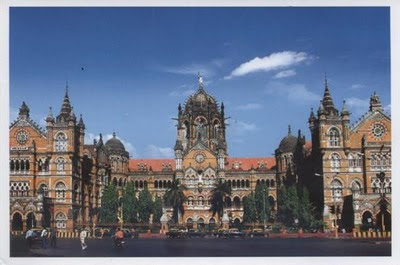 Chatrapati Shivaji Terminus formerly Victoria Terminus, and better known by its abbreviation CST or Bombay VT, is a historic railway station in Mumbai which serves as the headquarters of the Central Railways. It is one of the busiest railway stations in India, and serves Central Railway trains terminating in Mumbai as well as the Mumbai Suburban Railway.The station was named "Victoria Terminus" in honour of the Queen and Empress Victoria. It was opened on the date of her Golden Jubilee in 1887. In 1996, in response to demands by the Shiv Sena and in keeping with the policy oCf renaming locations with Indian names, the station was renamed by the state government after Chatrapati Shivaji, the famed 17th century Maratha king. The station was the site of a terrorist attack on 26 November 2008. More than 50 people were killed in the attack.

On 2nd July 2004, the station was declared a UNESCO World Heritage Site.

“The Chatrapati Shivaji Terminus, formerly known as Victoria Terminus Station, in Mumbai, is an outstanding example of Victorian Gothic Revival architecture in India, blended with themes deriving from Indian traditional architecture. The building, designed by the British architect F. W. Stevens, became the symbol of Bombay as the ‘Gothic City’ and the major international mercantile port of India. The terminal was built over 10 years, starting in 1878, according to a High Victorian Gothic design based on late medieval Italian models. Its remarkable stone dome, turrets, pointed arches and eccentric ground plan are close to traditional Indian palace architecture. It is an outstanding example of the meeting of two cultures, as British architects worked with Indian craftsmen to include Indian architectural tradition and idioms thus forging a new style unique to Bombay.” – UNESCO

Posted by Ravindra's Collections at 02:55 No comments: 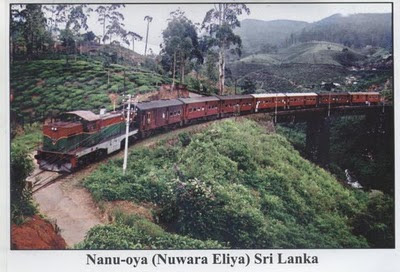 Udarata Menike (Hill Country Maiden) is a daytime daily express train that runs between Colombo and Badulla in Sri Lanka. The maiden journey of the train took place on 23rd April 1956. Here the train travels through Nanu Oya near Nuwara Eliya where you can find the world famous tea plantations.
Posted by Ravindra's Collections at 02:46 No comments: