Montpellier became a talking point in recent decades as an innovative centre of modern architecture and urban development. The tramway, opened in 2000, satisfies this reputation: It is without doubt one of the most stylish public transport systems in the world. Especially the design of the rolling stock is very extravagant: The vehicles for line 1 are blue and decorated with white swallows; those for line 2 are painted with colorful flowers, those for line 3 feature a maritime design and those for line 4 two different liveries in gold or black. You can like it or not, it attracts attention in any case. Line 1 crosses right through the heart of the Old Town; with more than 120,000 passengers per day it is the busiest tramway line in France. Line 3 holds a record too, it is the longest tramway line in France and it was opened as a whole in the present layout together with line 4 in 2012. Simultaneously line 2 was allocated on a more direct route via Comédie (before, this line was the longest line in France). All four lines intersect at Gare Saint-Roch. The outer sections of lines 2 and 3 are only single-track, and in the southwest of line 2 there is a short shared section with a branch railway. A fifth line is under development, as well as the ring closure of semi-circular line 4.
Posted by Ravindra's Collections at 19:33 No comments:

The Blue Zephyr Train on the Stone Mountain Scenic Railroad, Georgia, U. S. A 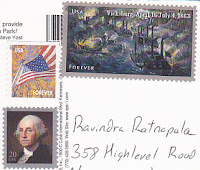 The Blue Zephyr is the name give to a train travailing  on the Stone Mountain Scenic Railroad - a standard gauge railroad that circles the perimeter of Stone Mountain Park in a loop, and provides views of the mountain en route. Climb aboard the  train with a full size locomotives  with open-air cars that takes you on a lively five-mile excursion around the mountain.

The railroad utilizes what was originally an industrial spur built in 1869 by the Stone Mountain Granite Company to serve quarries at the foot of the Stone Mountain,  with a connection to the Georgia Railroad’s main line in Stone Mountain Villege. The railroad later started an excursion service to the mountain. The spur was later abandoned, but the right of way remained in place (though the rails had been removed). In 1962, the present day scenic railroad opened, which had rebuilt much of the old right of way, with additional trackage to create a complete, continuous circuit around the mountain. The mileage of the circuit around the mountain is advertised as being five miles long, however, the actual mileage is 3.88 miles.

The railroad had de-accessioned its last remaining steam locomotives in early 2013, and currently owns and operates diesels exclusively. Pictured here is a EMD FP 7 Diesel Locomotive built in 1950.


Posted by Ravindra's Collections at 10:11 No comments:

Rail Car No 1 built in 1919 on the De Palma to Soller Railway, Spain

Rail Car No 1 built in 1919 on the De Palma to Soller Railway at the Soller Railway Station in March 1973. They were in service for 70 years until they were withdrawn in 1989, which made ​​them the most durable vehicles on the network.

Posted by Ravindra's Collections at 09:02 No comments: