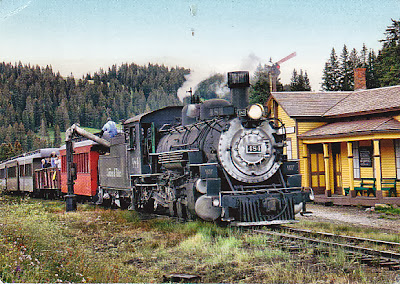 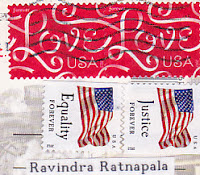 Experience the excitement of rugged, narrow gauge, coal-fired, steam powered mountain railroading on the Cumbres and Toltec Scenic Railroad, the highest Narrow Gauge Rail Road in U.S.A. The journey  traverse 64 miles of unparalleled scenery through the grandeur of the Rocky Mountains. It travels  through  tunnels, above deep gorges and over Cumbres Pass. This unique section of mountain railroad is owned by the states of New Mexico and Colorado and was designated a National Historic Landmark in October of 2012..

The Cumbres & Toltec Scenic Railroad is known for its extensive collection of rolling stock which can be viewed at Chama, New Mexico and Antonito, Colorado rail yards. The Cumbres & Toltec Scenic Railroad has four operating coal fired, steam operated, narrow gauge locomotives - #484, 487, 488, and 489. Here locomotive no 484 takes water at Cumbres Pass, Colorado at a elevation of 10,015 feet.

Southern Pacific and subsidiary St Louis Southwestern, were the only railroads to receive Class EMD SD45T - 2  locomotives. Rated 3600hp, they were designed to solve the problem of overheating in the numerous tunnels on the Southern Pacific routes. # 9221 built in 1972, is leading a freight train at Tacoma, Washington.
Posted by Ravindra's Collections at 22:43 No comments: 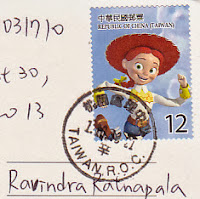 Alishan Mountain Forest Railway is regarded as one of three mountain climbing railways. Traveling along the 72-kilometer-long railway, the train climbs from 30 meters (about 98 feet) to 2,450 meters (about 8,038 feet) above sea level. Its gradient is so great that it is rarely seen in the whole world. From the bottom of the mountain to the top, the train crosses four forest areas – tropic, subtropical, temperature and the frigid zone. While climbing up the forest scenery is spectacular including eucalypt trees, coconut trees, conifers and the Frigid Zone forest. Along the way, the railway passes through 50 tunnels and over 77 bridges.

Posted by Ravindra's Collections at 08:33 No comments: 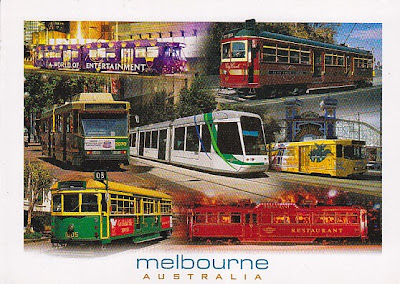 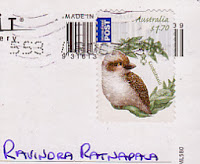 The Melbourne tramway network is a major form of public transport in Melbourne, Australia. As of June 2011, the network consisted of 250 km of track, 487 trams, 30 routes and 1763 stops. This postcard shows the different types of trams that has served in the tram ways since electric trams were introduced in 1906.
Posted by Ravindra's Collections at 08:36 No comments: 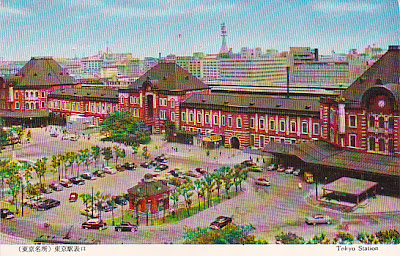 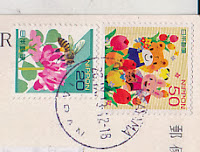 Tokyo Station is a railway station in the Marunouchi business district of Chivoda, Tokyo, Japan.  It is the main intercity rail terminal in Tokyo, the busiest station in Japan in terms of number of trains per day (over 3,000), and the fifth-busiest in Eastern Japan in terms of passenger throughput. It is the starting point and terminus for most of Japan's Shinkansen high speed rail lines, and is served by many local and regional commuter lines of Japan Railways as well as the Tokyo Metro

The main station façade on the western side of the station is brick-built, surviving from the time when the station opened in 1914. The main station consists of 10 island platforms serving 20 tracks, raised above street level running in a north-south direction. The main concourse runs east-west below the platforms.


The Shinkansen lines are on the east side of the station. Underground are the two Sōbu/Yokosuka line platforms serving four tracks (five stories below ground level) to the west of the station; the two Keiyō Line platforms serving four tracks are four stories below ground some hundreds of meters to the south of the main station with moving walkways to serve connecting passengers.

The whole complex is linked by an extensive system of underground passageways which merge with surrounding commercial buildings and shopping centres.
Posted by Ravindra's Collections at 22:18 No comments:

A Local Passenger Train in Netherlands. 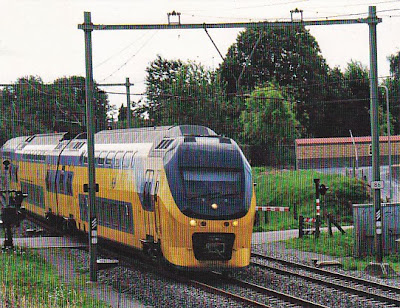 Posted by Ravindra's Collections at 22:08 No comments: 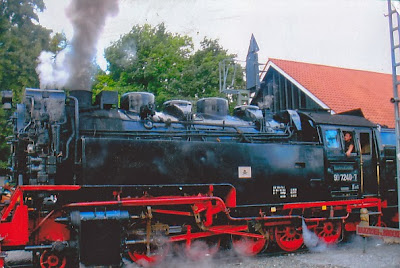