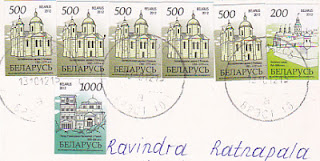 Brest Railway Station was built in 1886. The station was  damaged during  WW1 and WW2. The station was re-constructed between 1953 - 1957. It features a majastic waiting hall of the original design. From Brest there are direct  trains to Moscow, St.Petersburg in Russia, Kiev in Ukraine, Warsaw, Prague, Berlin, Paris.

The Brest Railway Museum is the first outdoor railway museum in Belarus located in the city of Brest. It was opened in 2002. The museum displays various historical locomotives of Soviet and German makes.

Posted by Ravindra's Collections at 06:38 No comments:

Some Where in Taiwan. 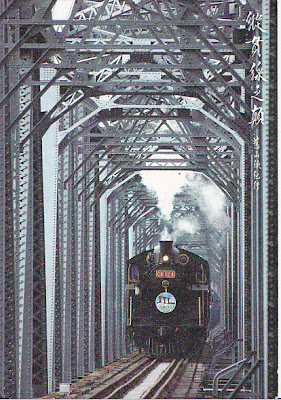 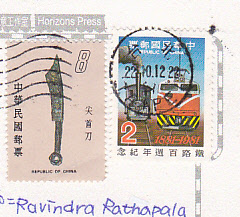 I received this post card via postcrossing. There is NO  information about the locomotive or the rail bridge on the back of the post card. If any reader can help me with some information that will be great. Thank you.
Posted by Ravindra's Collections at 06:34 No comments:

The LRT in Kula Lumpur, Malaysia. 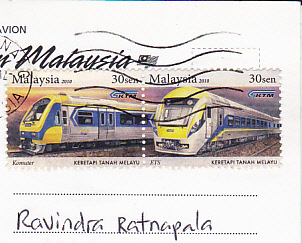 The Light Railway Transit System (LRT) is Kuala Lumpur's ambitious public transport system sufficiently developed to be fairly efficient and convenient  for the public to travel avoiding the congested and busy streets of KL.  There are three lines: - the Ampang line, the Sri Petaling line and the Kelana Jaya line. The postcard shows the LRT passing the streets of Kula Lumpur.

Posted by Ravindra's Collections at 23:32 No comments: 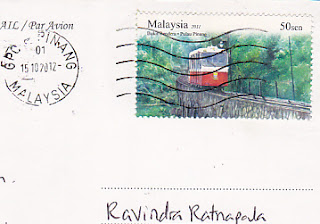 The Penang Hill Railway is a funicular railway which climbs Penang Hill from Air Itam near George Town in Penang, Malaysia The total journey which used to take about 20 minutes earlier now takes only less than 10 minutes after the old Red train was replaced with the new blue trains in 2011.  The new train and current railway, unlike the railway before 2010, does not require passengers to change trains halfway up. Passengers have non-stop service in air conditioned cars. The postcard shows (Top) the New blue train approaching the Lower Station, (Bottom) the train passing on the railway track built on archers and the train approaching the Upper Station.
Posted by Ravindra's Collections at 23:15 No comments:

The Last Day of Train Trafic at the Rotterdam Rail Bridge, Netherlands. 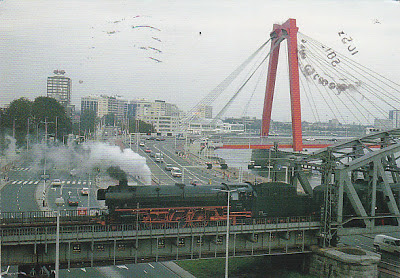 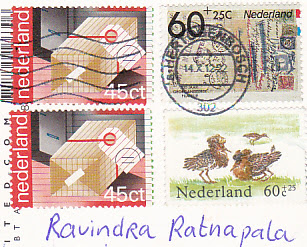 De Hef Bridge in Rotterdam is definitely the most spectacular lifting bridge in the Netherlands, one of the few still in existence.  A masterly example of pure engineering art and skill, trhe bridge was built in 1977 and served up to 1993 when the railway tunnel underneath the Maas River was completed and the De Hef bridge became superfluous, but it was preserved as a national monument.  The postcard shows the last train crossing the bridge on24th September 1993 on ground level.
Posted by Ravindra's Collections at 22:57 No comments: 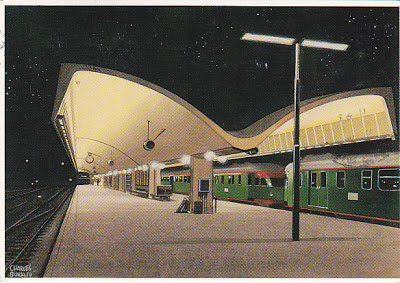 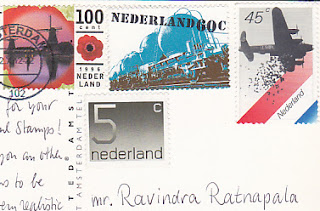 The Railway Museum in Utrecht established in 1927 is dedicated to preserving historical equipment from the Dutch national railway.  In 1954 the museum was permanently housed in the Maliebaan Station in Utrecht.  The Railway Museums  “Four Worlds” exhibits provide visitors a glimpse into the exciting history of railway progress in the Netherlands and the luxury in which European royalty once traveled. The locomotive on the postcard is a Dutch Electric Train preserved at the Museum.
Posted by Ravindra's Collections at 22:42 No comments: