The Eastern Belle was a Luxury Train that operated on the North Norfolk Railway in the 1930's. The Eastern Belle is seen at the Sheringham Railway Station with a Class B 12 Locomotive No 8561.
Posted by Ravindra's Collections at 09:15 No comments: 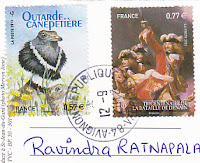 The Cévennes steam train is a tourist train that runs between Anduze and Saint  Jean du Gard in the Cevennes in France. The train usually serves three stations  -  Anduze , Saint  Jean du Gard , Bambouserale Prafrance , and a fourth, Thoiras, only in the most important occasions.  The line is  just 14. 5 kilometers. On the line there are 9 viaducts, 1 steel metal bridge viaduct and three tunnels.  The line was opened on 26th May 1909. At that time it operated a train service for  passenger and freight traffic especially for silk Gard . Due to the WW 2 due to the decrease traffic line ceased to operate in 1940. The 1950s saw a return cargo for the steam train, with traffic due to logging, but again due to the declines in activities the train service was inturupted on 31st July 1971. Decommissioning and removal of the rails are considered.  In 1979 a group of enthusiasts takes over the lines and saved it from destruction. The tourist train project started  on 3rd June 1982.

Here you see the train on the Mescladou viaduct, whose 11 arches span the confluence of the Gardon de Mialet and the Gardon de Saint Jean du Gard, which together form the Gardon d'Anduze. This is one of the line's finest panoramas, and the train slows down to let passengers admire the Gate to the Cévennes they have crossed a few kilometres earlier. Looking down, you may see fish sparkling in the clear water.

Posted by Ravindra's Collections at 23:31 No comments: 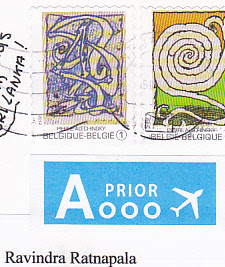 SNCB (Societe Nationale des Chemins de fer Belges) Type 1 were 4-6-2 steam locomotives built in 1935 for working heavy express passenger trains. Fifteen locomotives were built by the Societe Annonyme la Metallurgique at their Tubize factory.  They were retired in 1962, and one locomotive, 1.002 has been preserved by SNCB. It is displayed at the Treignes railway museum of heritage railway in the south of Belgium.

The museum presents you with a collection "from times gone-by" as well as the story of the industrial and railway history of Belgium. You will find on four of the 100m tracks, old steam locomotives, diesel auto-rails, locomotives from the 1950's, passenger coaches and railway maintenance vehicles. This museum was founded in 1994 and is situated on the grounds of the old international railway station.
Posted by Ravindra's Collections at 19:23 No comments: 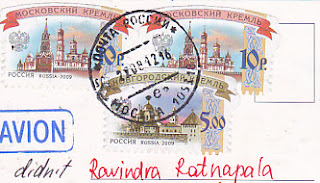 Park Pobedy is a Moscow Metro station. At 84 metres underground, Park Pobedy is the deepest station in Moscow and the third deepest in the world by mean depth, after Kiev Metro’s Arsenalna and St. Petersburg Metro’s Admiralteyskaya, and the very deepest station by maximum depth, 97 m. It also contains the longest escalators in Europe, each one is 126 metres long and has 740 steps. The escalator ride to the surface takes approximately three minutes. This is the only Metro station where all passengers board and exit trains in different locations. A further complication: only the southern (inbound) platform has an entrance vestibule, so passengers arriving at the outbound platform must change platforms before exiting.

The two platforms work of architects Nataliya Shurygina and Nikolay Shumakov are of identical design but have opposite colour schemes, which creates a striking effect. The pylons of the outbound platform are faced with red marble on the transverse faces and pale grey marble on the longitudinal faces. The inbound platform is exactly the reverse. The station is adorned with two large enameled panels by Zurab Tsereteli depicting the Patriotic War of 1812  (at the end of the inbound platform) and the Great Patriotic War (on the outbound platform).

Posted by Ravindra's Collections at 07:30 No comments: 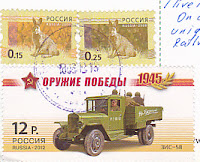 The Round Baikal Railway is a historical railway in the Irkutsk region of Russia. It runs along the Northern shore of the Southern extremity of the lake from the town of Slyudyanka to the Baikal settlement.  The  89-km–long line covers the route Slyudyanka-2–Kultuk–Maritui–Baikal. Four stations are currently in operation: Kultuk, Maritui, Ulanovo, and Baikal, with one section of double track at 137 km. The Round-Baikal contains thirty-eight tunnels with a total length of 9063 m (the longest of them, a tunnel through cape Polovinnyj, is 777.5 m long). There are also 15 stone galleries with a total length of 295 m and 3 ferro-concrete galleries with apertures, 248 bridges and viaducts, and 268 retaining walls. The Circum-Baikal has no equal in Russia as to the richness of engineering constructions.

Take a full day train tour on the most exotic part of the Trans-Siberian Railway. The sacred lake with all its awesome beauty passes before the eyes of its passengers. On the one side, the rocks pile up unimaginably high. On the other side the waves from the lake lap over the carriage-wheels. The Round Baikal Railway is a unique monument of history and engineering architecture with numerous tunnels, elegant arches and protective walls placed on picturesque landscape. The part from Sludyanka settlement to Port Baikal is abundant in tunnels, arches and bridges supporting the walls. Foreign tourists respectfully name it as the museum of Russian engineering or the Golden Buckle of the Great Siberian Trail.

Posted by Ravindra's Collections at 07:12 No comments: 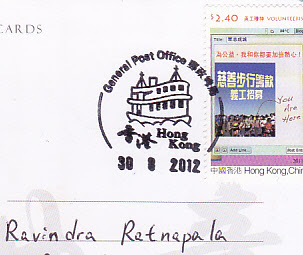 Hong Kong Tramways is one of the earliest forms of public transport in Hongkong. Trams service began in 1904, is also a major tourist attraction and one of the most environmentally friendly mass transit systems. It is the only exclusively Double-Decker operated tram system in the world, and one of only three non-heritage tram systems in the world that use double-deck cars. Today’s trams are probably the largest, most inventive collection of moving billboards in the world. Hong Kong Tramways now owns 163 Double- Decker trams.
Posted by Ravindra's Collections at 09:17 1 comment: