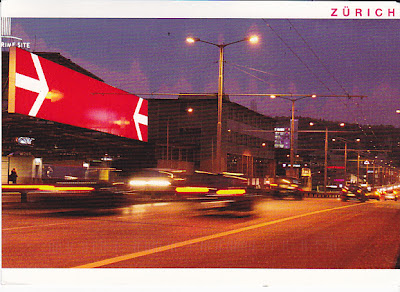 Zürich Hardbrücke is a railway station in the central part of the Swiss city of Zurich. The station was opened in 1982 and expanded in 1990 in line with the introduction of the S Bahn scheme.
Posted by Ravindra's Collections at 04:30 No comments: 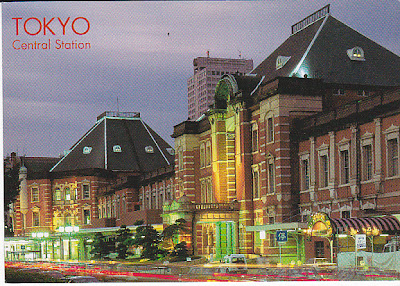 Tokyo Central Station  (Built in 1914) is a railway station in the  Marunouchi business district of Chiyoda, Tokyo, Japan, Near the Imperial Palace grounds and the Ginza commercial district. It is the main intercity rail terminal in Tokyo, the busiest station in Japan in terms of number of trains per day (over 3,000), and the fifth-busiest in Eastern Japan in terms of passenger throughput. It is the starting point and terminus for most of Japan's  Shinkansen high speed rail, and is served by many local and regional commuter lines of  Japan Railways, as well as the  Tokyo Metro.
Posted by Ravindra's Collections at 04:22 No comments: 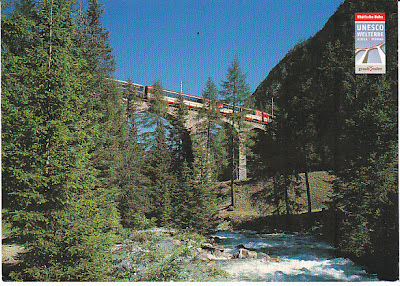 Set high in the mountains, the Albula/Bernina railway - a Unesco World Heritage Site - is not just an important link between Switzerland and Italy. The famous Rhaetian Railway red train also takes you on a historic journey to the natural beauties of the eastern canton of Graubünden. Passengers leaving Tirano get the message almost immediately: the Bernina Express is a train with a difference. The moment it pulls out of the station of this little Italian town, the train mingles with the traffic and crosses the Piazza del Santuario della Madonna, competing with pedestrians, bicycles and women with shopping bags. From Tirano, 429 metres above sea level, the red train climbs the Val Poschiavo valley, skirts lakes and glaciers, crosses two mountain massifs (the Bernina and the Albula), and calls at many tourist resorts before reaching the Swiss town of Thusis. The train then travels on to Chur, the capital of Graubünden and the oldest town in Switzerland. With its 196 bridges and viaducts, 55 tunnels and 128 km of track, the railway is a miracle of technology – an achievement that, even a hundred years after it was built, continues to fascinate.

"Rhaetian Railway in the Albula / Bernina Landscapes, brings together two historic railway lines that cross the Swiss Alps through two passes. Opened in 1904, the Albula line in the north western part of the property is 67 km long. It features an impressive set of structures including 42 tunnels and covered galleries and 144 viaducts and bridges. The 61 km Bernina pass line features 13 tunnels and galleries and 52 viaducts and bridges. The property is exemplary of the use of the railway to overcome the isolation of settlements in the Central Alps early in the 20th century, with a major and lasting socio-economic impact on life in the mountains. It constitutes an outstanding technical, architectural and environmental ensemble and embodies architectural and civil engineering achievements, in harmony with the landscapes through which they pass." - UNESCO

Posted by Ravindra's Collections at 08:39 No comments: 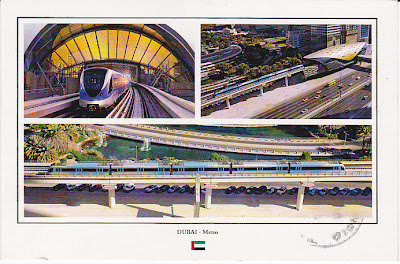 The Dubai Metro is a driverless, fully automated metro network in the United Arab Emirates city of Dubai. The Red and Green Lines are operational, with three further lines are planned. These first two lines run underground in the city centre and on elevated viaducts elsewhere. All trains and stations are air conditioned with platform edge doors to make this possible. The first section of the Red Line, covering 10 stations, was ceremonially inaugurated at 9:09:09 PM on 9 September, 2009. With the line opening to the public at 6 AM on 10 September. The Dubai Metro is the first urban train network in the Arabian Peninsula.  More than 110,000 people, which is nearly 10 per cent of Dubai’s population, used the Metro in its first two days of operation. The Dubai Metro carried 10 million passengers from launch on 9 September 2009 to 9 February 2010 with 11 stations operational on the Red Line. At 75 km, the Dubai Metro is frequently cited as the world's longest fully automated metro network.

Posted by Ravindra's Collections at 07:09 2 comments: 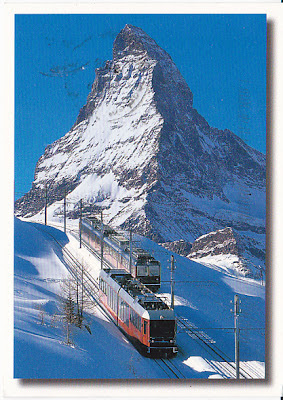 The Gornergratbahn (GGB) is a 9 KM long meter gauge  mountain rack railway. It leads from  Zermatt, Switzerland (1,604 m/5,262 ft), up to the  Gornergrat (3,089 m/10,135 ft). The Gornergrat is a starting point for many hikes, as it lies surrounded by 29 peaks rising above 4,000 m (13,123 ft) in the Alps and several glaciers, including the  Gorner Glacier (which is billed as the second longest glacier in the Alps). At the end of the line on Gornergrat, the Matterhorn  is visible on a clear day. It is also a popular  skiing area. Work on the railway started in 1896, it opened on August 20, 1898 for summer only operation. Year round operation to the summit began in 1942. The upper terminal was remodelled in 2004. The Gornergratbahn has always been electrified. The entire line is 9,339 m (30,640 ft) in length, including 3,790 m (12,434 ft) of double track, and traverses an altitude difference of 1,469 m (4,820 ft). The railway typically operates two-railcar units that can carry approximately 2,400 passengers per hour from Zermatt to the mountain summit. The railway is owned by the BVZ Holding and under common management with the  Matterhorn -Gotthard Bahn.
Posted by Ravindra's Collections at 06:52 No comments: 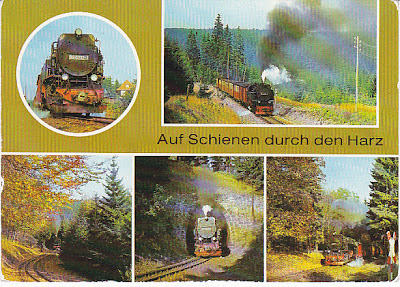 The Harz Railway was formerly the main line of the  Harz Narrow Gauge Railways and runs from  Wernigerode to Nordhausen. The tourist potential of the  Brocken is so great that the  Brocken Railway is effectively the main line today. The Harz Railway joins up with the Selke Valley Railway to Quedlinburg at Eisfelde Talmule where all trains are organised to make good connections.
Posted by Ravindra's Collections at 06:36 No comments: