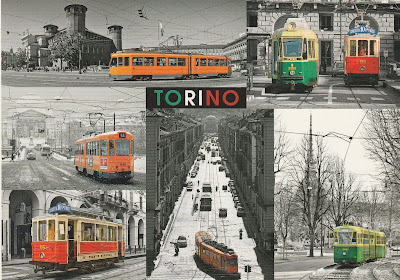 The Turin tramway network is an important part, along with the Turin Metro of the public transport network of the city of Turin in Italy. In operation since 1871, the network is about 84 km  long, and comprises 10 lines.

Posted by Ravindra's Collections at 07:29 No comments: 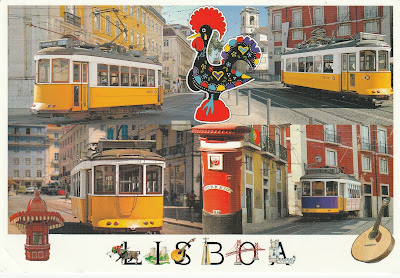 The Lisbon tramway network  serves the municipality of Lisbon. In operation since 1873, it presently comprises five urban lines. The construction of the Metro and the expansion of the Bus system began the slow decline of the network.

The five remaining lines only operate in the southern centre and west of the city. Despite the relevant tourist attraction, those lines are still very important because of sections of the city's topography that can only be crossed by small trams. Tram 15 also connects the entire western river front of the city to the centre and allows a better flow of passengers with the bus system towards an area that still is not served by the metro.
Posted by Ravindra's Collections at 21:25 No comments: 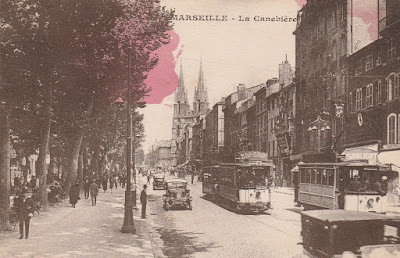 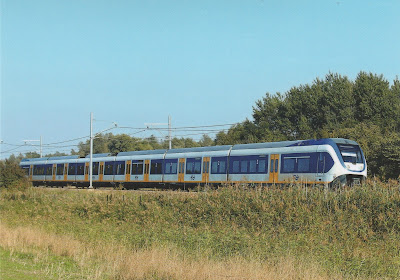 The Sprinter is the nickname for a City Regional Train in operation since 2003 in the Netherlands. If you observe the stamps, you will see the same kind of train on the stamps too.

Posted by Ravindra's Collections at 20:34 No comments: 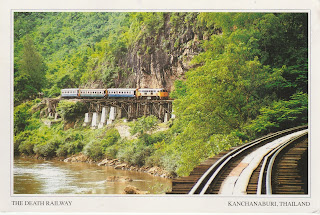 The Burma Railway, also known as the Death Railway, the Thailand-Burma Railway and similar names, is a 415 kilometres (258 miles) railway between Bangkok, Thailand, and Yangon, Myanmar. The portion in use today measures some 130 km (80 miles). The line was abandoned beyond Nam Tok Sai Yok Noi. Today there is a regular train service between Thonburi railway station to Kanchanaburi via the Bridge on the River Kwai.

Posted by Ravindra's Collections at 20:16 No comments: 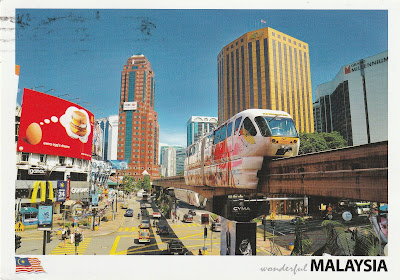 The KL Monorail Line is an urban monorail system in Kula Lumpur, Malaysia. It opened on 31 August 2003, with 11 stations running 8.6 km (5 mi) on two parallel elevated tracks. I

Posted by Ravindra's Collections at 18:39 No comments: 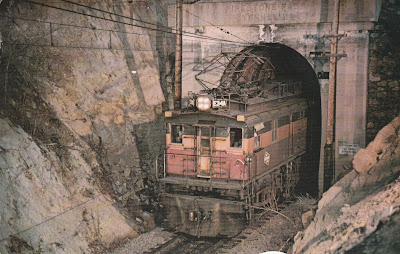 Of the three northernmost cross-country railroads, the Northern Pacific had completed its mainline to the distant ocean by 1883, the Great Northern having finished its task in 1893. Meanwhile the Chicago, Milwaukee & St. Paul (as it was known then) had not ventured west of the Missouri River, but in 1907 that company's management authorized and extension  (Chicago, Milwaukee & Puget Sound Railroad) to the Pacific's shores. Because there were very few suitable routes through the Rocky Mountains the CM & PS track lay close to that of the NP in western Montana, as well as in Washington State. The construction proceeded rapidly, and by the fall of 1909 the rails had reached Puget Sound. When it was completed the CM & StP/CM & PS became the second railroad to operate over its own track between the Midwest and the western sea, the Atchison, Topeka & Santa Fe system having been first.

The laying of rail over Pipestone Pass in Montana was difficult. The 14 miles between Butte and the tunnel was inclined at 1.8percent, while the eastern flank included nearly 24 miles of 2.) percent gradient. Both approaches were characterized by short segments of extreme curvature where deviations from the shortest route were needed to maintain a uniform grade. Pipestone Pass, however, was but one of four major summits which were obstacles in the path of Chicago, Milwaukee & Puget Sound. There was another almost identical one somewhat more than 100 miles to the east, s shorter one on the Montana - Idaho border, and the entire Cascade Mountain range in Washington.

The building of the CM & PS had been a bold move, completing as it did directly with the NP, as well as the GN and UP. The, at the end of 1915, it commenced electrified operations between Deer Lodge (West of Butte) and Three Forks to Harloton, Montana and westward  over the Bitter Root Mountains to Avery, Idaho, 438 miles in all. During 1917-1919, 228 additional miles, between Othello and Tacoma, Washington, were strung with overhead wires, leaving a non electrified gap of 216 miles which still remains.

The overhead distribution system carried power at 3000V-DC, produced by AC-fed sub-stations along the line. General Electric and American Locomotive produced the locomotives, which were drawbar-coupled back-to-back pairs of 2-B+ 2000hp units. Each unit weighed 280,000 pounds, and could exert a tractive effort of 53,000 pounds. Subsequently, the paired units were separated, recombined and renumbered in 3, 4 and 5 unit groups. The 34A had been 10501A until 1939, and 10229A until 1932. GE's  construction number was 5374A; Americans was 55948.
Posted by Ravindra's Collections at 09:05 No comments: 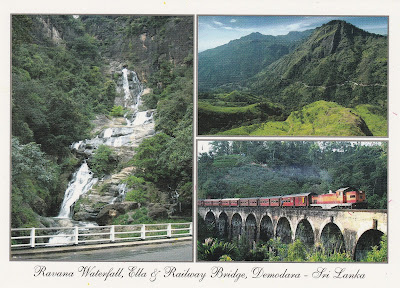 The railroad between Colombo and Badulla in Sri Lanka is a unique and scenic rail road not to be missed when traveling in Sri Lanka. There are several train a day on this unique railway line through the tea plantations and the Central Hills of Sri Lanka, one of the UNESCO Natural World Heritage sites. The railways were introduced to Sri Lanka by the then British administrators. The railway system in the hill country line is still very much British with old signal systems, railway stations more than 100 year old (still preserved). Enjoy the beauty of Sri Lanka on this scenic railway.
Posted by Ravindra's Collections at 03:10 No comments: